On the 22nd of October Levenshulme Good Neighbours hosted the wonderful Noah’s A.R.T group at the inspire centre. The aim was to enrich the lives of the older people we support by organising a session with their wonderful therapy animals. Interacting with animals in this way has proven to reduce stress and improve mental wellbeing – and it was clear on the day it had a very positive impact on our clients. It was lovely to see so many clients enjoying themselves, and the animals were very interactive and well behaved. Our members were able to stroke and feed rabbits, rats, guinea pigs and dogs, and were particularly impressed at the tricks and problem solving skills of one of the spaniels. It was clear from the smiles around the table that everybody very much enjoyed themselves. 24 people attended.  One of our members S.. (80yrs), who we nudged to get a little closer to the three Guinea pigs found the dynamics of people and animal interaction that day to be fascinating. She stayed for the complete two hours and some time after. She said it was good to see people happy. Another member R.. (92yrs) who made his own way for the event mentioned how the well-groomed bunnies reminded him of his, and Joanne (63yrs), found her favourite dog of the two whose face lit up and came to her left ear, as he says ‘he knows what he likes.’ Our staff Naomi had an opportunity to stroke the well grouped rabbit (Syd or Nancy), and Ray slightly overcame his fear of rats by holding one up close for more than three seconds. An overall delight of an event, and we would like to thank the COOP for their donations, without which such events could not have taken place. 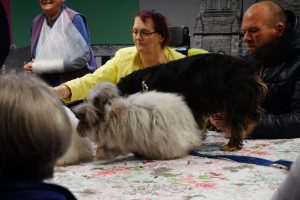 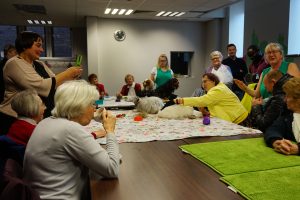 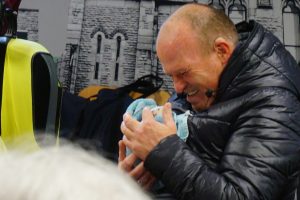 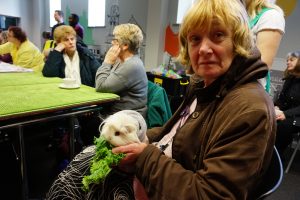 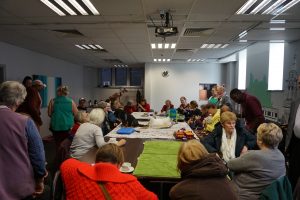 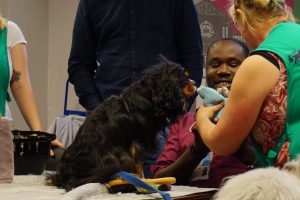 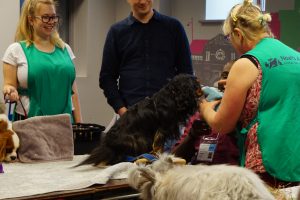 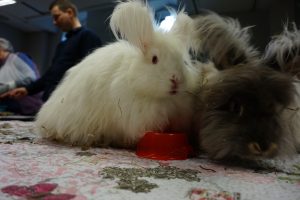